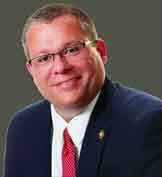 In addition to operational responsibilities, they have daily contact with members of the public in the office and by phone.

Sheriff Molder began his career in law enforcement as a Detention Officer in 1994. He has remained in law enforcement for over twenty five years. He served over two years at the Harrisburg Police Department where he was a patrol officer. He was an instructor for four years at the Law Enforcement Training Academy in Pocahontas. He has been employed at the Poinsett County Sheriff’s Office for over 16 years where he was a deputy, patrol sergeant, chief deputy, and now serving as sheriff.

Sheriff Molder graduated from the Arkansas Law Enforcement Training Academy in 1995. He currently holds a Senior certificate with the Commission on Law Enforcement Standards and Training. He has an Associate of Applied Science in Criminal Justice from Black River Technical College, a Bachelor of Science degree in Psychology and Master of Arts degree in Criminal Justice, both from Arkansas State University.

Responsible for receiving, maintaining, and tracking all civil process that comes to the Sheriff's Office. These include Orders of Protection, Summonses, Subpoenas, and various Writs. This position also deals with felony arrest warrants from Circuit Court and maintains the Sheriff's Fee Account. Entering and maintaining all Incident/Offense Report.  Preparing case files, and the Bonds sheets. In addition, she assists with receptionist and telephone operator responsibilities in the Administration Offices. Connie has worked for the Poinsett County Sheriff’s Office since August 6, 2001.